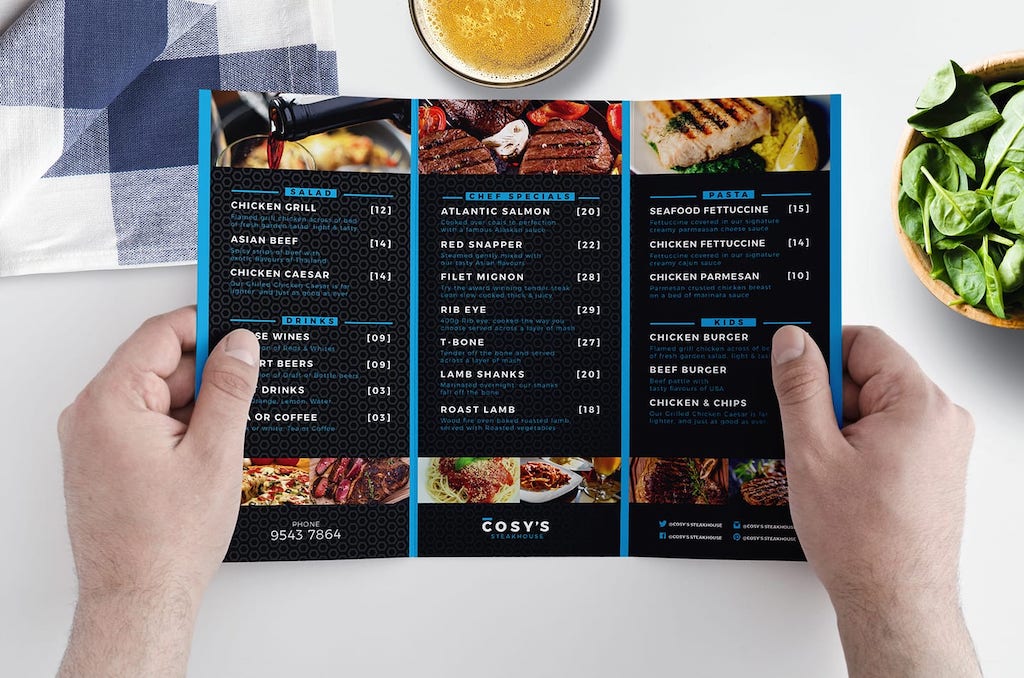 The key to a successful restaurant lies in the menu. Your restaurant could serve the most delectable dishes this side of the country but without a properly engineered menu, how are you going to convince customers to try it?

It all comes down to word choice. The best menu descriptions are always short, informative and, most importantly, tempting. The right combination of words can send your sales through the roof, whereas a poor selection will leave your customers confused, uninspired and uninterested.  Luckily, we’ve put together this menu writing guide that will lead you into the terrain of tantalising tastes and leave your guests salivating.

Flavour is the deciding factor in any order so you need to write a description that builds excitement and anticipation for what’s to come. With the right choice of words, you’ll be able to convince an indecisive or hesitant customer to make a decision and try something new. Be precise and choose from these words to send your customers over the edge:

Citrusy: A bright flavour like that of lemons, limes, oranges, and other citrus fruits.

Cooling: A taste that mimics the feeling of cold temperature. Often used to describe mint.

Fiery: A taste that feels as though it gives off heat. Another word for spicy.

Fresh: A light and crisp taste. Often used to describe produce or herbs.

Full-bodied: Rich flavour that can feel heavy in the mouth. Often used to describe wines.

Herbal: A bright, fresh, or sometimes earthy taste created by the incorporation of herbs.

Honeyed: A sweet or candied taste that may be reminiscent of honey.

Nutty: Any taste similar to the flavours of nuts. Often used to describe cheeses.

Robust: A rich taste with some earthiness. Often used to describe wines or aged liquors.

Smoky: A taste reminiscent of the smell of smoke.

Tangy: A biting taste that feels tingly in the mouth.

Texture is yet another important consideration for your menu items. The right choice of words can help your guests imagine what it will be like eating your food even before they order it. Choose from the following list to give your diners a complete sensory experience what’s to come:

Airy: A light, pillowy texture often created by the incorporation of air.

Buttery: A smooth and creamy texture similar to that of butter.

Chewy: The texture of a food that needs to be chewed thoroughly before swallowing. Can be light and bouncy or heavy and sticky.

Creamy: A smooth and rich texture that usually comes from the incorporation of dairy.

Crispy: A light texture with a slight crunch.

Crumbly: The texture of a food with a loose structure that falls apart into small pieces or crumbs.

Crunchy: A firm, crisp texture often identified by the sharp, audible noise that the food makes when being eaten.

Crusty: The texture of a food with a hard outer layer and soft interior.

Delicate: A light, fine texture that may come apart easily.

Fizzy: A texture brought on by the presence of many small bubbles, usually referring to carbonated liquids.

Flaky: A light texture characterized by layers that come apart during eating.

Fluffy: A light and airy texture.

Gooey: A viscous, sometimes sticky texture arising from the presence of moisture in a dense solid food.

Juicy: A succulent, tender texture characterised by the presence of liquid in solid food.

Silky: A fine, smooth texture characterised by a sleek feel in the mouth.

Smooth: A consistent texture free of grit, lumps, or indentations.

Tender: A soft texture that is easy to break down.

Velvety: A smooth and rich texture.

How Is It Made?

Using words that describe the preparation method of your dishes also help to give your guests an idea of what the food will taste, look and feel like. The following words communicate all the above:

Baked: A food that was cooked in an oven, often resulting in a crispy outer coating.

Blanched: A food that was scalded in boiling water and then moved to cold water to stop cooking. Results in a softened texture.

Blackened: A food that was dipped in butter and coated with spices before being cooked in a hot pan, resulting in a blackened appearance.

Braised: Food that is briefly fried in a small amount of fat and then is slowly stewed in a covered pot. Results in a seared, crispy exterior coupled with a tender interior texture.

Breaded: A food that was coated with a breadcrumb mixture or batter that is then baked or fried into a crispy outer layer.

Broiled: A food cooked with intense radiant heat, as in an oven or on a grill. Often results in a darkened appearance and crispy texture.

Caramelised: A food that has been cooked slowly until it is browned and becomes sweeter in taste.

Charred: Food that is grilled, roasted, or broiled and gains a blackened exterior coupled with a smoky flavour.

Fermented: A food that has been introduced to bacteria, yeast, or another microorganism to produce organic acids, alcohols, or gases. May result in a pungent, biting flavour.

Fried: Food that is cooked by submerging partially or fully into hot oil. Often results in a crispy or crunchy texture and golden colour.

Glazed: A food that becomes moistened by having a flavourful coating dripped or brushed onto its surface. May result in a glossy appearance and thin, crisp outer layer.

Infused: A food that has been steeped in liquid with another ingredient in order to extract the flavour of the ingredient. Often used with herbs.

Marinated: A food (usually meat) that has been soaked in liquid containing flavourful ingredients like herbs, spices, vinegar, and oil.

Poached: Food that has been cooked in nearly boiling liquid. Often results in a tender, moist texture.

Roasted: Food that has been cooked with dry heat in an oven or over a fire. Often results in a browned exterior and crisp coating.

Sautéed: A food that has been cooked quickly in a small amount of fat.

Seared: A food that is cooked in a small amount of fat until caramelised and then finished by roasting, grilling, or another method. Results in a crisp outer texture and tender interior.

Smoked: Food that is cooked or preserved by long exposure to smoke from smouldering wood. Results in a distinctive, bold flavour.

Whipped: Food that has been beaten to incorporate air. Often results in a light, fluffy texture.

Appealing words that catch the eye will help your clients order faster, increase your turnover and up your sales. When you sit down to write a menu make sure to take your time whether it’s your first menu or an overhaul. With the proper time and consideration, you’ll be able to craft an irresistible menu that will keep clients coming back to try every item.