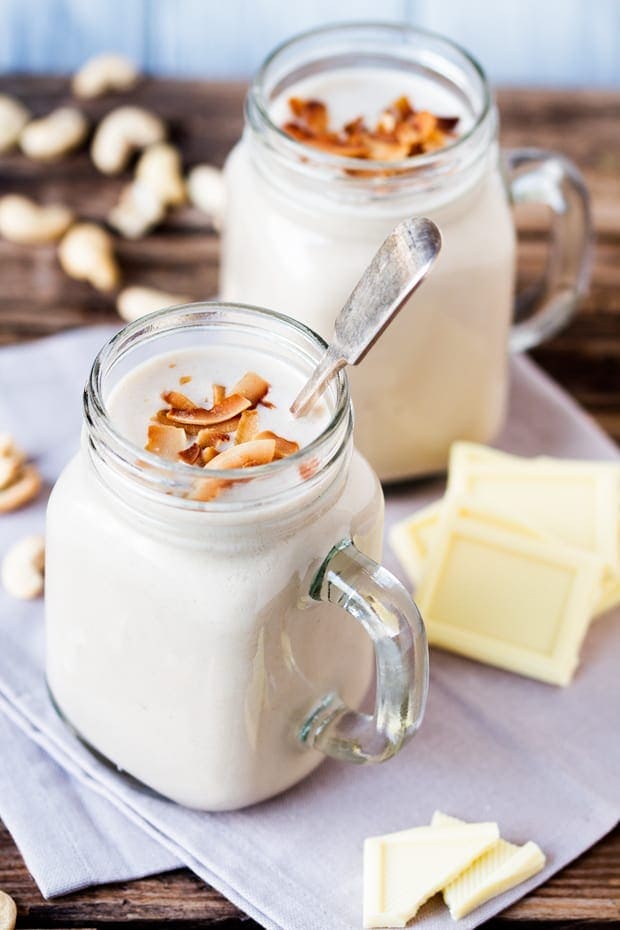 Warm up with this delicious winter warmer that will warm not only your tastebuds, but also your heart! What’s best is that this smoothie is actually good for you – oats, nuts, maca powder, banana, coconut and coconut milk. There’s also just a little bit of chocolate in there to add a touch of sweetness.

1 ripe Banana (the riper the better)

2 tbsp Toasted coconut (simple place unsweetened coconut flakes in a hot oven for 1 minute to brown – but be careful, they burn quickly)

Add the white chocolate to a jug, and pour in 2 cups of the coconut milk. Microwave until the mixture is hot and the chocolate has melted (you can do this in a pan if you prefer).

Place the oats, banana, maca powder, cashew nuts, 1 tbsp of the toasted coconut, and the 1/2 cup of cold coconut milk into your blender (don’t add any hot liquid to your smoothie maker or blender).

Blend on high for a minute until the oats and have been completely incorporated (add an extra splash of cold coconut milk or water if it’s looking too thick to blend properly).

Divide the blended oat mixture between two cups and stir in the hot milk/chocolate mix. Top with the remaining toasted coconut and serve. 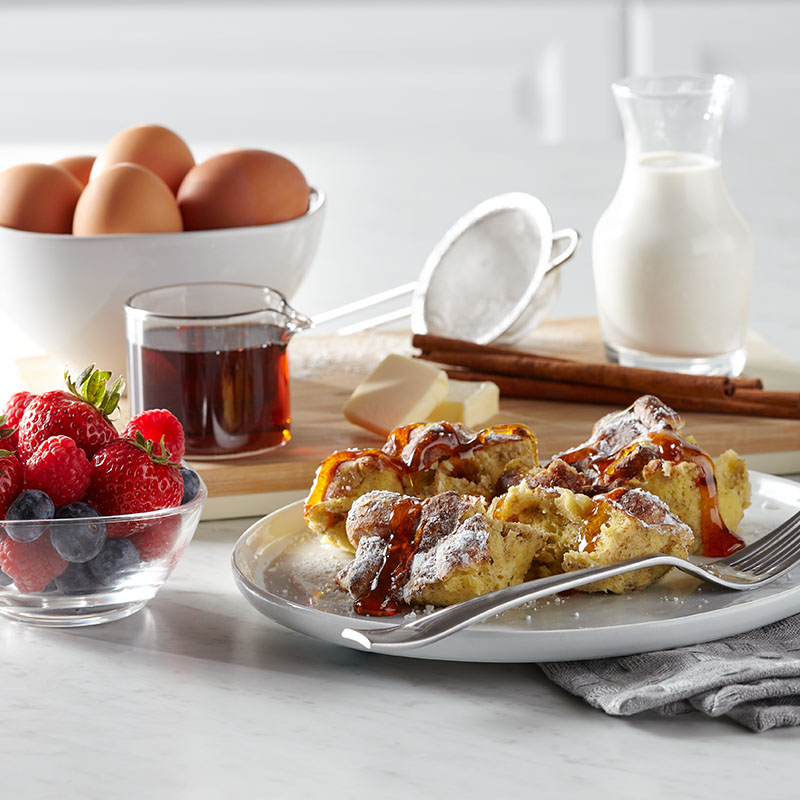 2 cups half and half

In a large bowl, beat eggs. Add half and half, granulated sugar, vanilla extract, and ground cinnamon and stir until blended. Add bread to bowl, stirring until well coated.

Place crock in slow cooker base. Cook on LOW for 2 ½ to 3 hours or until mixture is cooked through. Sprinkle with confectioners’ sugar and serve with maple syrup. 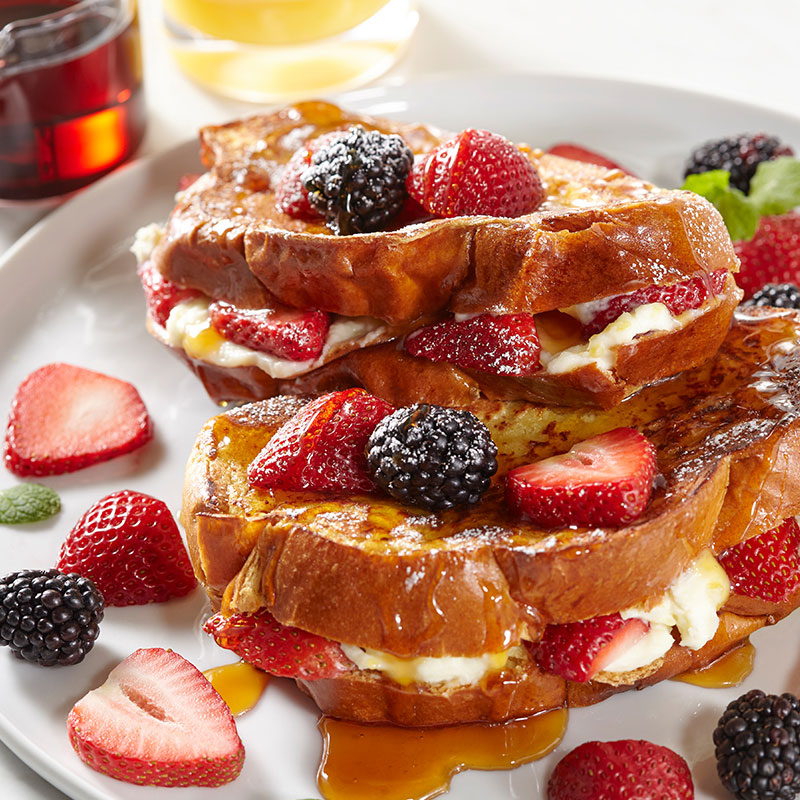 It’s heaven on a plate! We don’t think anything else in the world can be as satisfying !

2 TABLESPOONS HALF AND HALF

IN A SMALL BOWL, COMBINE MASCARPONE CHEESE, GRANULATED SUGAR, HALF AND HALF, ½ TEASPOON VANILLA EXTRACT, AND LEMON ZEST. PLACE MIXTURE IN A 1-GALLON RESEALABLE PLASTIC BAG. CLOSE BAG. REFRIGERATE UNTIL READY TO USE.

USING TIP OF A SMALL KNIFE, CUT A SLIT FROM SIDE TO SIDE TO FORM A POCKET IN EACH SLICE OF BREAD.

PLACE STUFFED BREAD POCKETS IN MILK MIXTURE AND SOAK 30 SECONDS ON EACH SIDE. DRAIN AND CAREFULLY TRANSFER EACH BREAD POCKET TO COOKTOP.

COOK TURNING ONCE, UNTIL BROWNED AND HEATED THROUGH, ABOUT 6 TO 8 MINUTES. 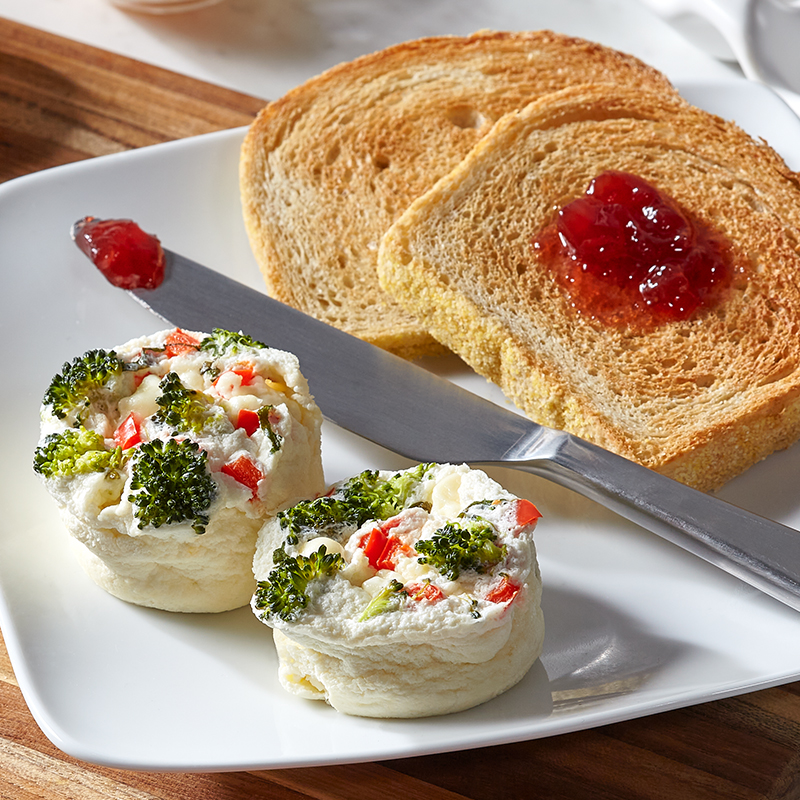 Simple, healthy and so delicious your guest will be begging you for more!

Salt and pepper to taste

In a small bowl, using a whisk or a fork, combine egg, water, salt and pepper. Stir in cheese, herbs and vegetables. Fill egg cups to the MAX fill line in the tray.

Fill water cup to 100 mL line and pour water into centre of reservoir in base. Replace egg tray.

Cover with lid. Plug Egg Bites Maker into outlet to start cooking.  Both lights will turn on. When green light goes out, unplug egg bites maker.

Remove lid and remove tray from base. Allow egg bites to rest for a few minutes. To remove egg bites, invert tray onto a serving plate. 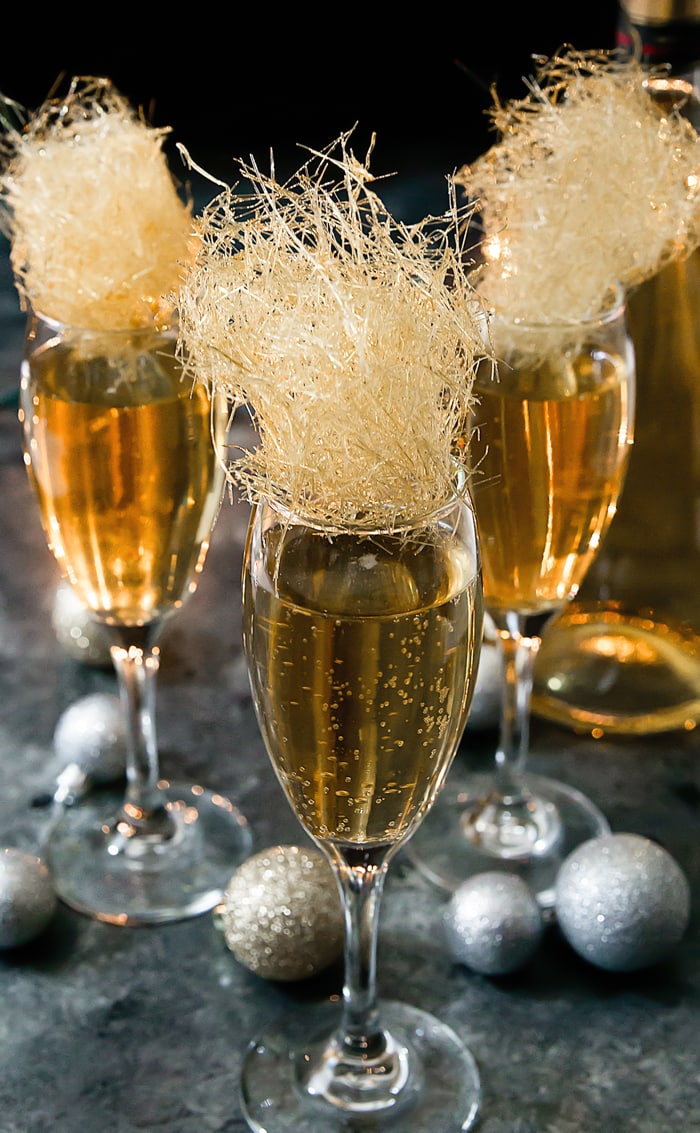 Impress your guests with this unusual (and delicious!) topping for your glass of bubbly. They look a little bit like sparklers and they are easier to make than you might think.

Line the table or floor you are working on with newspaper. The sugar can fling quite far sometimes, so make sure you have a large work space covered and newspapers will make clean-up much easier. Place a baking pan upside down onto your work space. Place a piece of parchment paper over it, tucking the end into the pan. You can also use a large bowl or something similar. You basically want a non-stick surface for the spun sugar threads. When the sugar is first spun, it is malleable enough to bend and shape so you can make them on a flat surface and then shape them. However, if you have specific shapes in mind, you can adjust accordingly. For example, if you want to make a nest, you could wrap parchment around a small upside down bowl and fling threads around the bowl. If you want a cotton candy shape, you can wrap parchment paper around a large stick/mixing spoon, etc.

In a medium pot, add sugar, water and syrup. Stir lightly until all sugar is wet. If any sugar is sticking to the edges of the pot, brush them down.

Bring your pot to medium heat. Let mixture boil and do not stir or touch it (very important!!). Allow it to boil until it turns a light pale yellow. Once it reaches that colour, immediately remove pot from heat. If you want to make a more gold coloured spun sugar, allow the mixture to boil slightly longer until it turns a slightly darker yellow. However, keep in mind that you will likely have to warm up the sugar mixture again before you are done making all your spun sugar and each time you warm it up it will get darker.

Allow the mixture to cool slightly. Using two forks (you can also use a decapitated whisk tool), start stirring the mixture. Lift up your fork to check the consistency of the syrup. You want the consistency to no longer be drips, but instead it should be a solid thin stream.

Working quickly (the sugar cools quickly), dip the two forks in the syrup and then move them back and forth quickly across your parchment paper. Continue doing this until you have quite a few threads, like a nest. Once it’s as thick as you’d like, remove from parchment paper and shape to desired shape before sugar hardens.

Repeat process again to make more. If sugar in the pot cools off too much and begins to harden, place it back on the stove and warm up. You should have more than enough sugar syrup to make tops for 12 champagne glasses and probably have some leftover.

The finished spun sugar will eventually get sticky and melty if they sit out too long. If you do not plan on using right away, place them gently in some ziploc bags (separated with parchment paper so they don’t stick together). 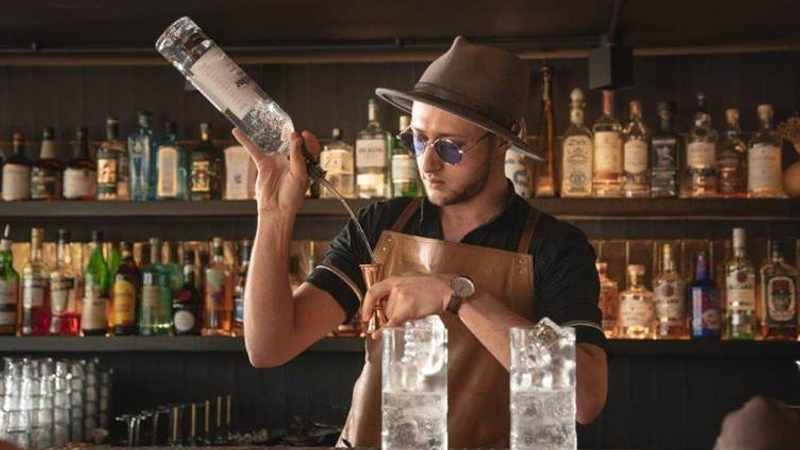 Capetonian Joshua Hendricks has been crowned best Barman in South African at the local leg of the Diageo World Class bartending competition recently held in the mother city. The 24-year-old is the youngest person to win the award of this Global Competition, which has supported, trained and inspired more than 400 000 bartenders, across 60 countries, for over 12 years

In the knock-out challenge, 50 spirits had to be identified correctly by the contestants until just one person remained.

“I came fifth in this challenge, so I didn’t do that great. In fact, I did not win any of the rounds, but I managed to be consistent about placing in the top three and this is why I had the highest mark at the end of the competition,” Hendricks said.

In the speed round, where contestants had to create 10 original cocktails in eight minutes, he said his best creation was a Singleton honey sour, with a red wine and pear reduction between the foam. Hendricks said it is a New York sours type of drink which is done quite often, but the way he did it was amazing. And Tuesday saw two challenges for the mixologists, a heritage challenge where they had to make a group serve using one of the Johnnie Walker expressions based on their culture.

“I am coloured, so I made a rooibos pinotage tea blend which represented the aunties that sit and skinner in the kitchen, and a vermouth with crackling,” he said.

In the evening during the food challenge, Hendricks chose a deconstructed paella and a saffron risotto croquette, and spiced prawn to pair with his Singleton and apple fennel juice cocktail. He said it had cumin-infused vermouth and honey citrus with star anise – aromatic, fresh and tart so that the acid could cut through the fat of the dish.

Lastly, the remaining six contestants had to create their own pop-up bar within 24 hours, using a concept of their own choice. Hendricks’s concept was chrysalis – the metamorphosis of a butterfly, and the bar featured a garden atmosphere with autumn leaves and origami butterflies.

“Each of my cocktails represented a stage of the metamorphosis of a butterfly’s life cycle. The judges liked the concept and for me, this challenge was my favourite despite being stressful as I’d been planning it for such a long time that seeing it come to life so that people could experience it was really exciting,” he said.

Hendricks will be flying his way to Australia in September to represent South Africa in the global final of the Diageo World Class competition.

You go Joshua! We wish you the best of luck ! 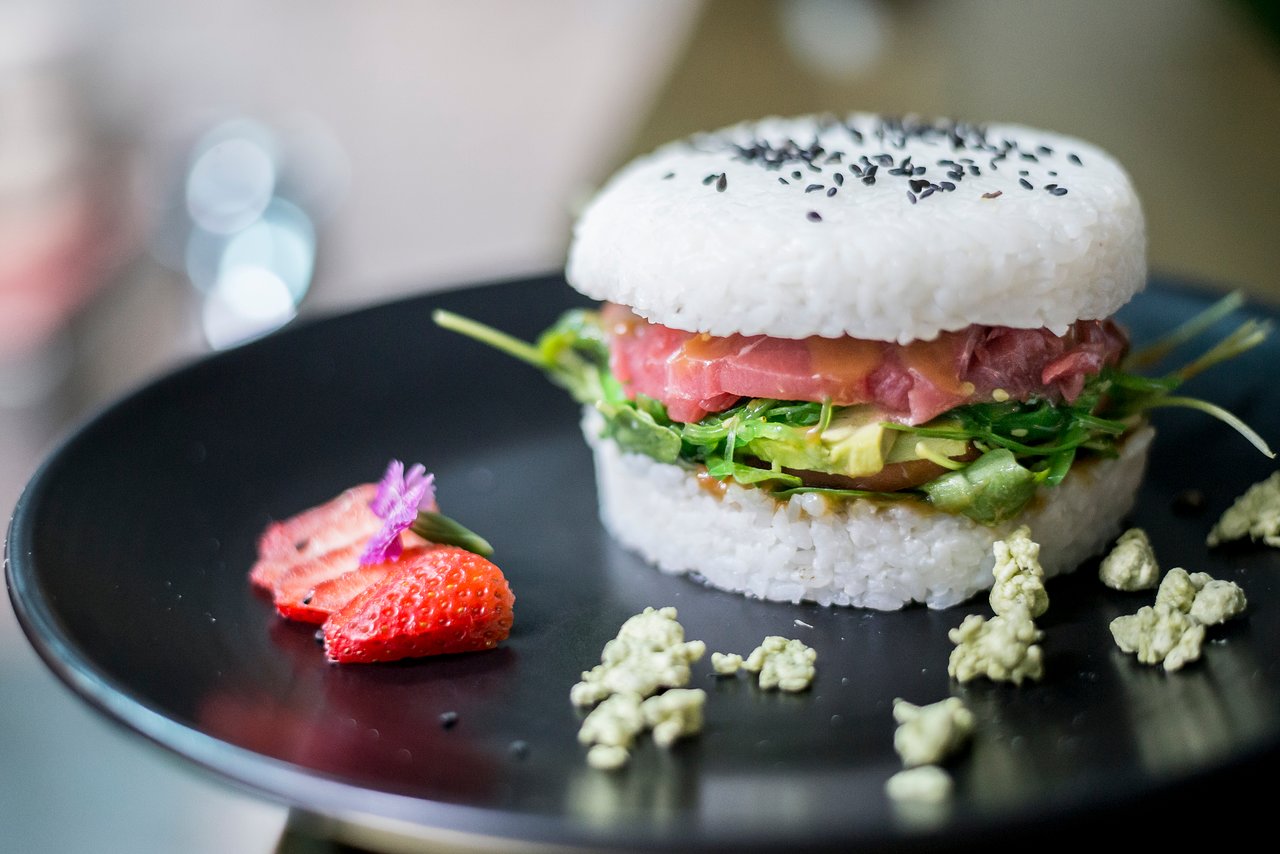 Sushi Burgers basically consist of burger “buns” made out of rice and can be filled with anything from tofu to salmon. But even though they’ve been around for some time, they’re now having a pretty major moment on Instagram which more or less means that they’ve made it as far as food fame goes.

Give it a try at home or on your menu. It’s pretty easy to make and the possibilities are endless.

HOW TO MAKE IT: STEP BY STEP